A fascinating look back into our mechanical history. Steamfest tells the tale from when horsepower was provided by horses on through the steam era and to the development of internal combustion engines. The exhibits are brought to life and can bs seen in operation in the extensive museum grounds. To add to the fun and atmosphere there are train and tractor rides, live music and refreshments. A great family day out.

There will be much to see and plenty of action.
Click entries below to checkout exhibits 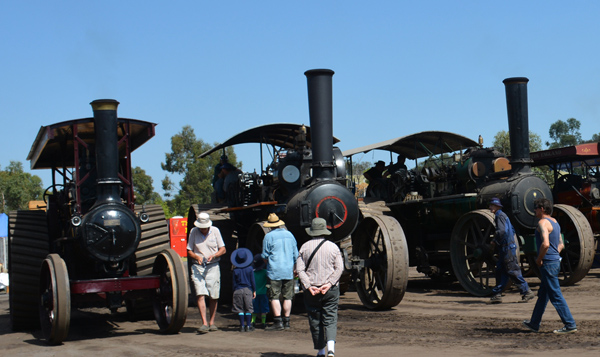 The pair of mighty Z7 steam ploughing engines will be using the balance plough as they were designed to do. The engines sit at opposite ends of the field and winch the plough back and forth between them.
There will be a demo in the rear paddock at 12noon weather permitting.

Steam traction engines, steam rollers and steam trucks will all be out and running. After the grand parade the engines are lined up and there will be an opportunity to inspect the engines close up and chat with their drivers.

The miniature railway and tractor drawn people mover will be busy giving rides for all. The grounds are quite extensive so a ride on the train or people mover is a good way to get the top paddock.

Start and stop your favourite engines to control their run around the tracks.

The Heritage Draught Horse club are very popular exhibitors at Steamfest.  The club's large grounds provide an opportunity to see these magnificent beasts performing farming duties as it was done in the days when horsepower came from horses.

Bigfoot the walking dragline will be putting on a demonstration at 1:30. At 2:30, after the grand parade, there will be a chance to walk through and view it from the inside.

Over the decades the club has built up an impressive collection of earth moving machinery. The Morris family will be putting on a great display in the back paddock with diggers, graders, draglines and bulldozers and a dump truck. All those classic sandpit toys in full size playing in the dirt.

The club's impressive diesel engine collection will be performing all weekend. Try and catch the big engines starting up. Start up and running times are displayed near the engines.

Be sure not to miss the intricate reproductions of machinery from the museum constructed from old redgum fence post's!

Thomas the tank engine fans will enjoy the model railway.

A number of portable steam engines are on display. Some are driving exhibits.

It all looks much more interesting when you see it working.

The club's philosophy is to be a working museum and the aim is to get the exhibits operational. At Steamfest we go one step further and try to demonstrate machinery carrying out the tasks it did in its working days.
Be sure to catch the steam driven sawmill in action.

The package boiler serving steam to the engines in the Stationary Steam Engine Museum will be in action all weekend keeping the magnificent exhibits turning over.

There are some great pieces of Victoria's industrial and maritime history on display here and they come alive with a gentle hiss of steam.

Steam hammers were once an essential tool of heavy engineering but you are unlikely to see one in operation anywhere but here. Our energetic blacksmith group are progresively bringing an impressive collection of vintage workshop tools online.

The tanks are always a crowd pleaser

The little engines that kept our farms and small business running when electricity was not readily available are out and running.

The steam engines and pumps that operated the steam tug Lyttelton II are set up to mimic the ship's engineroom. Steam to run the engines is supplied by a Farrar vertical boiler.

Over the Steamfest weekend the club's exhibits are enhanced by exhibits and displays from other clubs, individuals and community groups with complimentary interests. 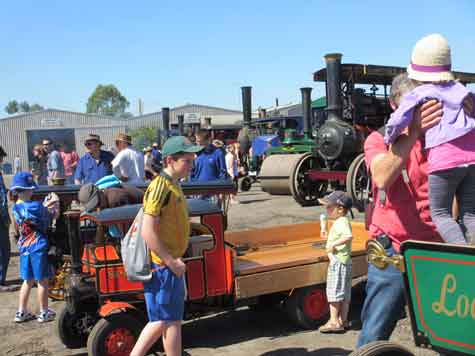 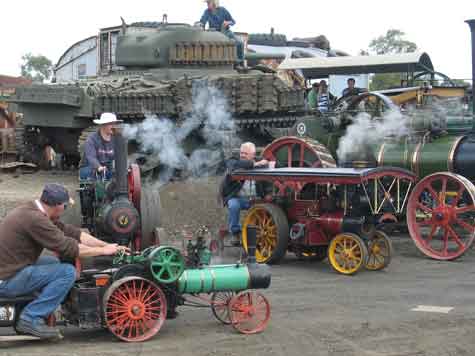 Those returning visitors who have missed a few Steamfests will notice how productive members have been despite being locked out of the site for many months.
A few of the highlights are:-
SAWMILLING
A recently donated saw bench is doing milling demonstrations driven by a portable steam engine.
NEW LOCOMOTIVE
A great example of the diverse skills of the membership can be seen in the new P class loco in use for the first time. This loco was designed and built from scratch by club members. A generous grant from Knox council provided much of the funding.
NEW REAR STATION
In 2021 the rail track was extended and the platform for access to the back paddock was repositioned.It has now been furnished with picket fencing and a passenger shelter.

You are encouraged to purchase tickets prior to arrival.
Click to book!
Tickets can also be purchased at the gate.
Adults $15, Child $5 (3 and under free)
Family $35 ( couple and children under 18)