The stationary steam engine section of the museum exhibits a fine collection of over 30 of the steam engines that powered early industry. They are plumbed into steam lines feed by a Cleaver Brooks package boiler and can usually be seen operating on steam on the last Sunday of each month. A selection are pictured below.

Compound horizontal engine with Proeli-Meyer valve gear, drop inlet valves and corliss exhaust valves It was fitted with rope brakes on the flywheels which are water cooled, indicators on each cylinder and tachometer. It can be operated as a single cylinder or compound engine.

This engine is probably the oldest engine in the collection and is thought to date from the 1860's. It has several features suggesting early construction. These include the cylinder being bolted to the bed and bar type crosshead guides.

The engine provided power via a flatbelt off the flywheel to a scour at Daltons Woolscouring works in Geelong.

This engine was ordered from the Castlemaine works in 1916 by the Public Works Department, State Ship Building Yards, Williamstown. It was installed in a land dredge built for the Bendigo Creek Trust to clear silt that was causing flooding.

This generating set was originally the electricity supply on the Melbourne Harbour Trust dredge the "George Kermode".

The museum's steam is supplied by a Cleaver Brooks package boiler which was manufactured under licence by Tomlinson Steel Ltd, Perth WA. in 1968. 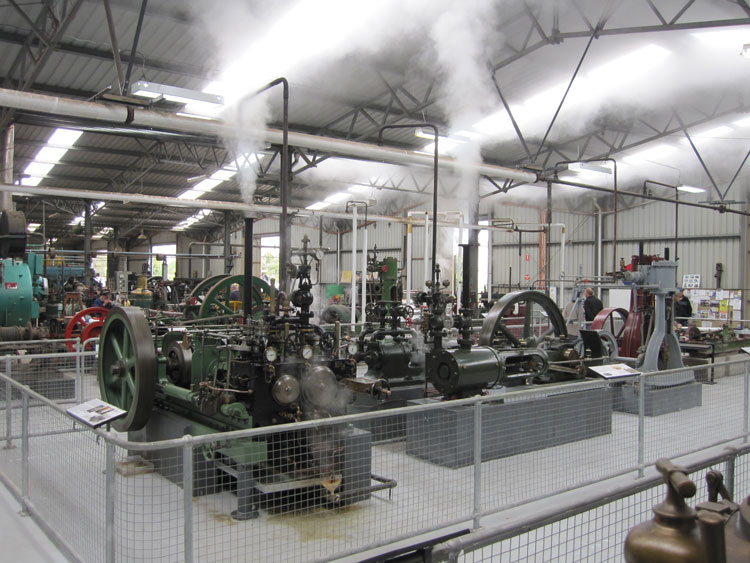