Although the club does not own a steam truck several club members do.

This Sentinel waggon is one of two rebuilt by a club member from the derilect remains of three trucks. It is garaged at the Steam Centre.

Other trucks owned by members and on display from time to time include a Yorkshire, some Fodens and other Sentinels.

This impressive pair of Fowler Z7 ploughing engines came to Australia to aid the construction of the Murrumbidgee Irrigation Scheme. One was purchased by MSTEC in 1971 the other belongs to a club member.They can be seen in action ploughing together at the annual Steamfest rally. The club owned engine is generally steamed on the last Sunday of most months. it has undergone a major overhaul with new tubes, a new chimney and canopy.

In addition to the ploughing engines there are around half a dozen other traction engines resident at the centre.

Some of these are under restoration by members and it is interesting to watch progress as they are worked on.

Restored engines can be seen in action on monthly run days or out and about on the road or at rallys.

The club's Marshall steam roller is often to be seen in steam on run days. At rally times it is joined by a club member's Fowler roller. The club also has an American Buffalo Springfield roller but this is currently under going repairs.

Scattered through the sheds at the club are 18 portable steam engines.

Most represented manufacturer is Marshall, Sons & Co Ltd. with most sizes from 3hp to 20hp to be found.

There are also Clayton & Shuttleworths, Brown and Mays, Barrows, Buffalo Pitts a Seeking and a few local makes.

There are three locally made portables at the club.
One is a Thomson & Co made in Castlemaine.

The second is a Johnson and Sons, Tyne Foundry,South Melbourne which has recently been restored to running order.

The other is a Herbert Thomson made in Armidale Melbourne. 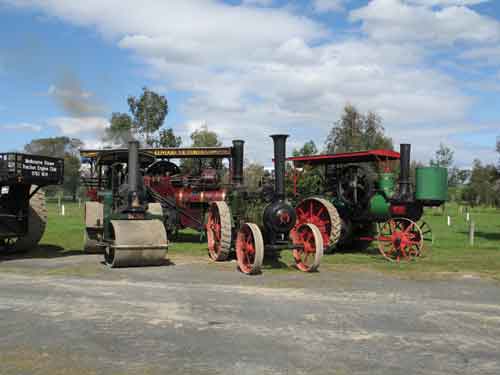