The club has owned Rapier W90 dragline since 1992 but until July 2008 it was stuck at the bottom of the  Hazlewood power station at Morwell in the Latrobe valley 150 km east of Melbourne. It has now been transported to the club thanks to a donation from International Power Hazlewood and a substantial restoration exercise has got it back to good working order.

In the first couple of years of the club's ownership a massive exercise was undertaken down at the mine to get it going. It had last operated at the end of the 1970's and much was required to get it  operational. The motivation of those involved was that this unique piece of equipment should not be lost. Ideally it should be on public display, preferably at the club premises. Although the machine was restored to operating order getting it out of the mine and on public display proved beyond the club's means at that time. Every now and then it had to be moved to accommodate mine operations. The last of these moves was in June 2008. Following this last walk at the Mine International Power Hazelwood assisted the club in moving the dragline to Scoresby.

Moving the dragline to Scoresby was a major exercise.

Back at the club the dragline underwent thorough restoration as it was re-assembled.

The coal dust has taken its toll on steelwork. Welding repairs and/or replacement of a significant number of components was required. The A-frame superstructure was re-erected on top of the cabin in February 2010. The cabin roof was replaced over the winter and a coat of paint improved its cosmetic appearance as well as protecting from further corrosion.

Unfortunately corrosion had set in on the boom and rust pockets developed between most joints weakening the structure. 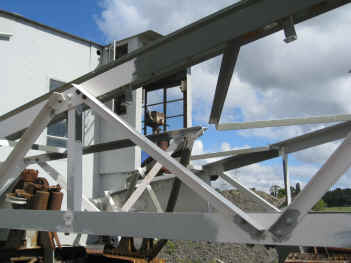 Nearly every joint had to be pulled apart, needle gunned and painted before reassembly. Many of the struts have had to be replaced. The whole structure had three coats of two pack paints. Those members currently involved are hoping the paint is good enough that they will be too old to be asked when it next needs painting.

In February 2011 the boom was reassembled and raised into place. "BIGFOOT" took its first steps in time for the 2011 annual Steamfest rally.